The 2012 HBIGS Student Retreat delivered the perfect balance of science and recreation and served as confirmation that this PhD program truly does attract students that are as intellectually engaging as they are fun and creative!

Famous for its world-class wine and ancient Roman ruins, Trier served as the host city and provided its welcome Mediterranean climate, allowing the group several excursions around the town throughout the weekend.  The retreat venue was a cozy hotel along the quiet Mosel River, where the family owners catered delicious Hungarian cuisine and prepared the largest room for both meals and presentations, granting us a unique space just for the retreat program.

To kick-off the retreat with a new tradition, an exceptional keynote presentation was given by Prof. Dr. Andrea Möller, of the Faculty of Biology and Science Education of Trier University.  She addressed the path of a scientific career choice, hinting on the essential intersection of both talent and motivation, and provided a fascinating look into research on how students conceptualize and embrace pivotal aspects of the scientific method throughout their academic career.  Four absorbing HBIGS student talks followed, and afterward, discussions continued over beer and wine until the late hours of the evening. 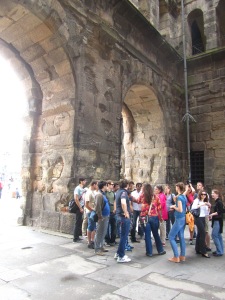 The next day was welcomed with steaming coffee and the second session of student talks.  Thesis topics ranged from protein kinetics and structure biology to genetics, drug delivery and biosensors, neurobiology, embryogenesis, cancer diagnostics, cell biology, and virology.  Even with such a wide spread of expertise, targeted questions led to further discussions during the coffee breaks and fostered some potential collaborations.  By the end of the third session in the afternoon, votes were collected and tallied to award the three best presenters of the weekend each with 25-euro cash prizes, also a new addition to the annual retreat program.  Congratulations go to Sahil Sharma, Thekla Hemstedt, and Christian Harak!

The energy continued at a favorite local wine tasting room, “Das Weinhaus”, where a wine connoisseur led the group in tasting five local Mosel wines, entertainingly explaining both subtle and dramatic characteristics of the range of choices.  A hearty and, particularly after five glasses of wine, delicious meal completed the experience.  For many of the group, the night was all about the Champions League Final football match, which, despite the unfortunate final result, provided the opportunity to find a great pub in the center of town where everyone could comfortably enjoy both the game and conversation, with some shisha on the side.  The evening progressed with a lively party at a dance club located at the foot of Germany’s oldest cathedral.

Ample sunshine made for an enjoyable city tour the next day, led by an enthusiastic guide around most of the eight UNESCO world heritage sites sprinkled around the historic capital of the Western Roman Empire.  All in all, according to the rhapsodic feedback from the entire group, the 25 HBIGS student participants made this retreat a great success.