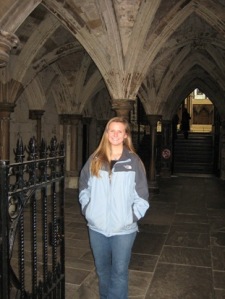 Early in her Denison career, Julianne realized how precious and unique the Denison community was in challenging and fostering thoughtful, well-rounded, and motivated students. She applied the supportive network of professors, staff, and talented students toward community service projects such as HOPE for Autism and the Brain Bee, as well as campus organizations like Sustained Dialogue and the OΔK Leadership honorary. Numerous high school and summer internships in neuroscience research laboratories at Stanford, the University of California, San Diego, the Cleveland Clinic, and Denison helped her to choose an academic path in neurobiology, even if that meant she had to create the major. Initially inspired by experiences with her neurologically challenged younger sister, Julianne’s marked curiosity about her sister’s conditions eventually translated into a career goal in neural plasticity and regeneration research. The combination of academic ambition and a desire to benefit the community through volunteerism and activism resulted in a year in Sweden on a Fulbright research grant following graduation. The time in Sweden was spent exploring molecular therapeutics for blindness, meeting ambassadors and diplomats, and experiencing the culture through participation as a member of community and university volunteer, musical, language, sports, and art organizations. Somewhere in between the research and activities, she also managed to step foot in over 25 countries during the year! She was able to extend her stay in Sweden under the auspices of an EU RetNet fellowship to continue her research. Julianne is now a PhD student at UCSD where she is studying adult neurogenesis and brain plasticity as part of the Biomedical Sciences program while also finding the time to organize several nonprofit educational opportunities for youth in San Diego, including another local Brain Bee. “Denison proved that involvements in many different areas could be as fruitful and profound as they were well-rounded: there was never a decision between focus and variety.”